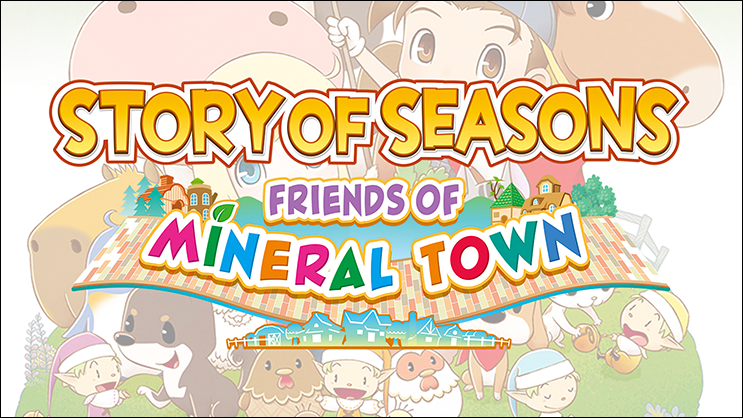 The Story of Seasons: Friends of Mineral Town remake has received several quality-of-life improvements, not to mention the new art-style, and most of which I can’t argue with. However, there were a few changes that stood out amongst the rest.

If you’re an old fan wondering why it is now referred to as Story of Seasons, the short answer is that the newer games now go by their original Japanese title—Marvelous split from Natsume in 2014, and since Natsume owned the rights to the Harvest Moon title, the name has been changed to Story of Seasons.

Some of these can be spoiler-y, so if you’re looking for a clean experience, this guide may not be right for you. With that in mind, here are five new quality-of-life features that have refreshed the old 2003 title.

RELATED: ‘Harvest Moon’ Isn’t The Same Game You Grew Up With 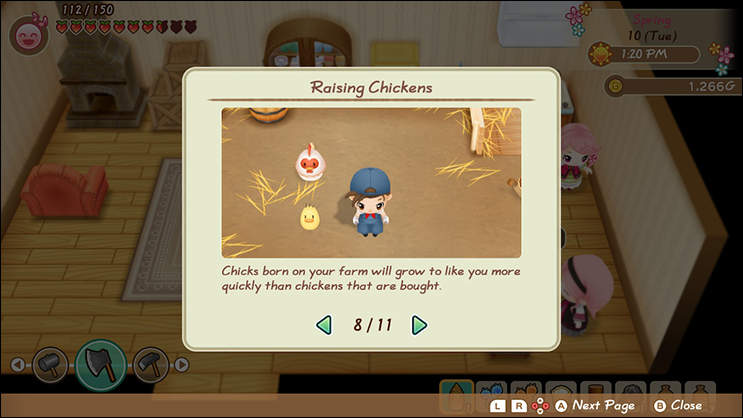 The livestock that you can buy from Lillia and Mugi are locked at 5 hearts maximum. In the old 2003 version of Friends of Mineral Town, your livestock had a maximum of 10 hearts, but gaining hearts wasn’t capped by festivals, etc. In the new remake, players must do more than brush their livestock everyday to achieve a 10-heart maximum—you now have to breed livestock, which brings a new difficulty to the game of raising livestock—and I really enjoy it.

I have a complete article on breeding livestock and how to care for them here.

Once your livestock has reached 5 hearts, (the little hearts underneath an animals name), you must breed your livestock to achieve a higher-affection limit of 10 ❤️’s.

This process isn’t too arduous, it just takes some dedication and patience. Once an animal on your farm reaches 5 ❤️’s, you can breed them to boost their offspring’s ❤️ limit to 6. Repeat until the offspring has reached ❤️ 10. 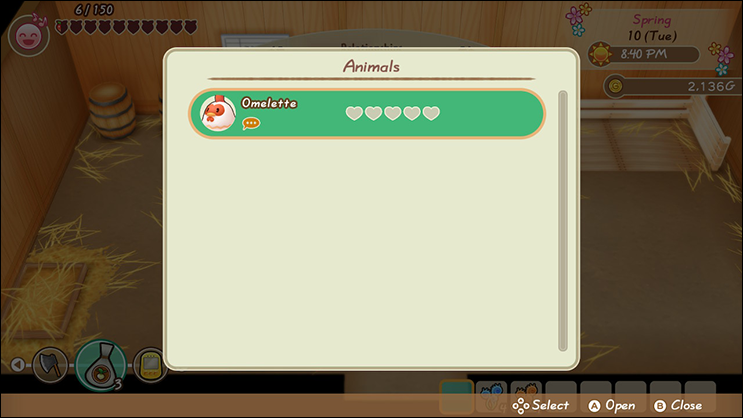 Depending on the level of affection your livestock has, the product they produce can jump in quality beginning at “Small” → “Medium” → “Large” → and finally, “Gold”. There’s also an elusive “Platinum” quality that can be achieved by letting your livestock graze outside for several hundred hours.

The amount of gold you receive from products will increase as the quality increases, so it’s definitely worth investing the time if you want to purchase upgrades for your farm, and if you’re working towards making your farm 100% profitable.

And did I mention there are several new livestock options? We have flavored cows, bunnies, new pets, and more. 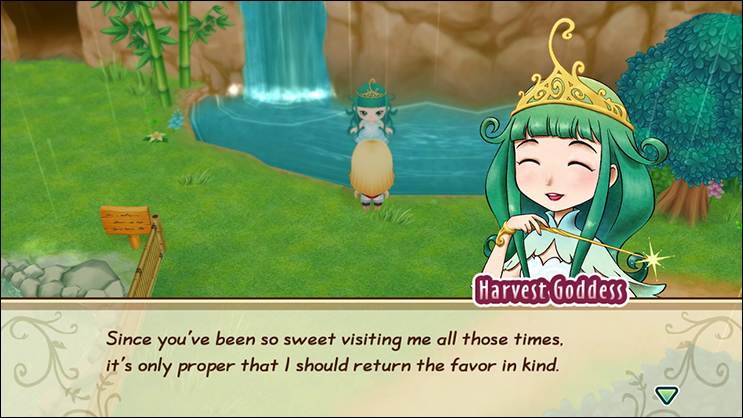 The Harvest Goddess lives in the pond next to the hot spring, along the path that leads towards Mother’s Hill. The Goddess will approach you with thanks if you throw items into her pond, and she might even include a gift for your daily contributions. The new remake has added several new rewards for gifting the Goddess, and I really enjoy working towards this goal. I think that the remake has done a great job dividing farm-life and social interaction with the villagers; you have to find the best balance that works for you, similarly to the original game. The Harvest Goddess enjoys flowers, crops grown on your farm, and animal products. She isn’t fond of inedible gifts like ores, building materials, accessories (Earrings, Dress, etc.), and fished-up junk.

RELATED: Gifting The Goddess In ‘Story of Seasons: Friends of Mineral Town’

I almost made this number one on my list because I really love this new feature so much. I really appreciate that the developers added so many new challenges to this game.

In the original Friends of Mineral Town, a recipe wasn’t required to cook at your kitchen, meaning you could look the recipe up on Google, and make it in the game as long as you had the ingredients and the utensils—this made winning your first cooking festival incredibly easy (the first cooking festival of the year is Spring 22 Year 1).

In addition to this, we now have ta few new ways to discover recipes besides befriending the Mineral Town villagers—from Lou, Anna’s Cooking Class, and watching the cooking channel on the television in your house on Tuesday’s. The new recipes you learn will be added to a Cookbook located in the Bookshelf in your house. Lou will arrive on your farm after you give 75 gifts to the Harvest Goddess and Anna lives with Basil and Marie in Mineral Town. You need to first befriend Anna to unlock the cooking classes, an easy way to see this is in the “Relationship Menu”—she needs to have nine musical notes next to her name. The first event cooking class with Anna will reward you with the Cake recipe.

I’m not entirely sure if winning the first cooking festival is doable, but I’m going to try my best (personal self-achievement, haha!). I didn’t make this number one because the herding bell is a great quality-of-life change, and incorporating star ranking for crops does a great job keeping me engaged in the game, and it adds even more reasons to make a profit from your farm.

Star Rank was a new feature in Story of Seasons: Trio of Towns, and it’s made a welcome come-back in the Story of Seasons: Friends of Mineral Town remake. The crops you grow will be rewarded a “Star Rank” (or quality ranking); the more stars the crop has, the higher quality it is and more gold you can receive when you ship the crop. The crop field determines the available ranks your crops can have, and your crop fields can be upgraded by Gotts after year 2. After year 2, you can increase the quality of your farm soil by paying Gotts a fee. There are five field level upgrades:

1. Farm Buildings Have A Herding Bell

I never bothered purchasing the Bell from Barley (er, Mugi) to move my animals outside because it was too much of a hassle, which was a shame because letting your animals graze outside unlocked the highest quality produce—the “Platinum-grade” produce, which required livestock to be outdoors for at least 600 in-game hours.

Now, you can ring a bell that is attached to your farm buildings to quickly herd your animals outside, and all livestock that are grazing outside will return to the Animal Barn/Chick Coop at 8:00 PM automatically. No more pushing them indoors!

There are several other new things that I enjoy about this remake, and there’s plenty to dislike… for example, the 8-character limit. I’m thankful for the small quality-of-life adjustments like the expanded inventory, the new achievement system, and plenty more, but as I reached Summer of my first year in Mineral Town, these stood out to me the most. Happy farming! 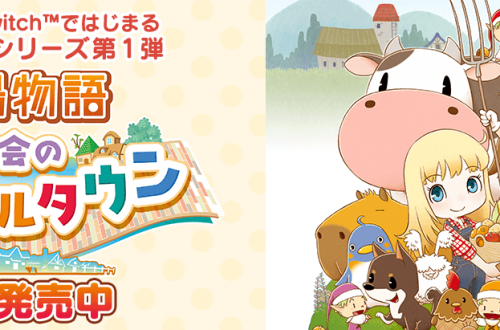 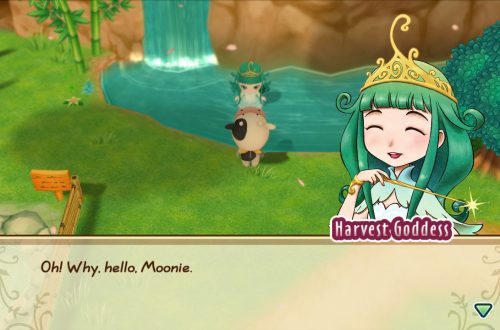